This is Part 2 of my blog post exploring using Oracle Application Express to develop an esports 360 review process! If you haven't already please go give Part 1 a read.
After sending everyone their own customized links it took around 24 hours to receive all the player feedback, and my next step was to put together the player-facing dashboards.

I wanted players to only be able to view their own information to allow some privacy. I could have made a bunch of user accounts to accomplish this, but instead just used a hidden page item passed via the URL and a unique code for each player. A few additional items I wanted to be able to show for each category evaluated:
That's a lot of information to display at once, but APEX provides a range chart which combined with some line series with line disabled provided this: 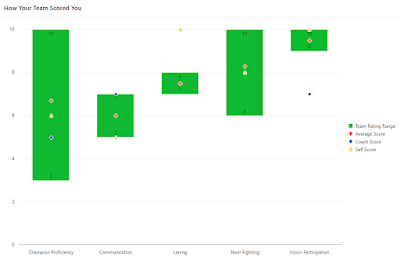 The most difficult part was not so much the charting as assembling the data. I had used a flat table structure which didn't fit well with the charting, so I created a view with some UNION queries and the Oracle min/max/avg analytic functions to better align the data structure with what the chart needed. Most players scored themselves within the range provided, although one player we discovered scored himself much higher than both his teammates and coach consensus.

The coach decided not to do the self evaluation, but I still wanted to provide him his ratings as seen by his players in a similar fashion. I also wanted to give the coach the ability to view each player dashboard individually. That was accomplished by simply copying the page above and turning the hidden page item into a visible drop down list to allow the coach to cycle through the player dashboards. This is one feature I love about APEX, how you can easily leverage and reuse prior work. Finally I made a new range chart to provide the coaching data like so: 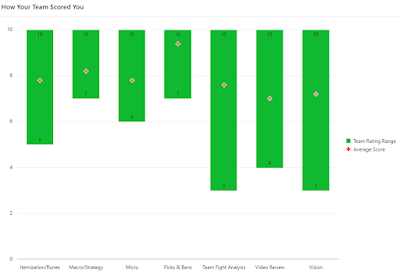 Part of the reason for evaluating the head coach on these criteria is to help better divide his responsibilities for the next season, allowing him to focus on where he's strongest and adding more staff to provide deeper dives in other areas. I'm happy to see agreement with the team on areas I felt the coach was strongest in - Itemization/Runes, Micro, and Picks & Bans.
The one area I had disagreement on was in Macro/Strategy, where I felt the coach had a great grasp on this but the team at times struggled in game to think on their feet, so I felt a disconnect between player and coach. However the team clearly felt they gained in this area, so I'll need to factor that in for next season's planning. The areas of Team Fight Analysis, Video Review, and Vision are going to to be split into two new video analyst positions next season, and I may or may not seek to fill a third analyst position for Macro/Strategy.

The dashboards above have already been helpful as management held a call and stepped through the data with the coach to help make some decisions towards next season. Here are some other ideas I've come up with for dashboards I'd like to develop in the offseason:
If you have a beginner understanding of SQL and would like to try building your own dashboards I would definitely recommend checking out Oracle Application Express - you can grab a free workspace here to test around with. I've found it a great tool at helping to gather data and solve problems!
Posted by Bossman at 12:38 PM